Children are a defenseless minority facing civilization killers created by a Tyranny of the Majority $30 trillion more in benefits than we are willing to pay in taxes. Debt is just one of the civilization killers we created by asking for unconstitutional Federal highways and other "internal improvements". The purpose of this document is to identify the threats, repeal the 17th Amendment, restore liberty to innovate sustainable infrastructure, and restore state sovereignty over "internal improvements".

First, the civilization killers that will replay the near collapse in 2008 some time in the 2020s:

Some will say that debt imposed on children cannot compare to the personal brutality of slavery. In the short-run this is true. But later this decade, access to oil will drop 20-30%. This is similar to the decrease in energy during the 1840s Irish Potato Famines, a brutal 24% reduction in population. Life requires energy. Less energy, without increased efficiency, requires less life.

My guess is historians will place the first wave of "Oil Famine" in 2008. The Arab Spring was trigged by hunger and mass migrations. In the US rising gas prices since 1998 forced more and more families to use their mortgage payments to buy gas to keep their jobs. In September 2008 foreclosures collapsed the banking system and nearly the economy.

As gasoline climb to over $5 a gallon, we are likely to see a more violent replay of 2008. Children cannot carry the debt we have placed on them as energy costs increase.

We are in a race between unaffordable oil and our exercising the self-discipline to be energy self-reliant and end our mortgaging of children.

Following is documentation on why Federal infrastructure policies created a Tyranny of the Majority and how we can correct the defects by enforcing the Constitution's Divided Sovereignty. Specific actions:

America's Founders were shaped by rare circumstances that forged practical awareness in wars and rebellions between 1754 to 1816. They were guided by the Enlightenment's understanding that governments based on the consent of the governed, not the divine rights of kings.  The wrote and rewrote declarations and constitutions that were better than they could politically deliver:

"We hold these truths to be self-evident, that all men are created equal, that they are endowed by their Creator with certain unalienable Rights, that among these are Life, Liberty and the pursuit of Happiness.--That to secure these rights, Governments are instituted among Men, deriving their just powers from the consent of the governed"

Liberty is the objective.

Democracy is the essential and flawed tool.

America's Founders recognized the defect of democracy in their slave economy and the period of "wild democracy" following the Revolution.

Benjamin Franklin: "Democracy is two wolves and a lamb voting on what to have for lunch. Liberty is a well-armed lamb contesting the vote!"

John Adams: "Remember, democracy never lasts long. It soon wastes, exhausts, and murders itself. There never was a democracy yet that did not commit suicide."

John Quincy Adams: "Democracy has no forefathers, it looks to no posterity ; it is swallowed up in the present, and thinks of nothing but itself."

Federalist #10 (Madison):  “Hence it is that democracies have ever been spectacles of turbulence and contention; have ever been found incompatible with personal security or the rights of property; and in general have been as short in their lives as they have been violent in their deaths...

Sovereignty is a monopoly of violence within a territory. Sovereignty is necessary to minimize violence from war and crimes by coercing compliance with laws. The opening paragraph of Thomas Paine's Common Sense states clearly the difference between our community and government:

“Some writers have so confounded society with government, as to leave little or no distinction between them; whereas they are not only different, but have different origins. Society is produced by our wants, and government by our wickedness; the former promotes our happiness positively by uniting our affections, the latter negatively by restraining our vices. The one encourages intercourse, the other creates distinctions. The first is a patron, the last a punisher…”

In  notes we must control both the lust for power by the governing and the lust of a Tyranny of the Majority:

Federalist #51 (Madison): "Ambition Must be Made to Counter Ambition"

Federalist #46 (Madison): The federal and State governments are in fact but different agents and trustees of the people, constituted with different powers, and designed for different purposes.

Federalist #28 (Hamilton):  “Power being almost always the rival of power, the general government will at all times stand ready to check the usurpations of the state governments, and these will have the same disposition towards the general government. The people, by throwing themselves into either scale, will infallibly make it preponderate. If their rights are invaded by either, they can make use of the other as the instrument of redress. How wise will it be in them by cherishing the union to preserve to themselves an advantage which can never be too highly prized!” [We the People have found it necessary to use these two types of governments to wage war on the other in the Revolutionary and Civil Wars. And troops in the Civil Rights Movement].

The Constitution of the United States of America is a compact between "We the People". By our consent, as limited to the enumerated powers in written Constitution, we Divided Sovereignty in a compound republic so democracy could be made a tool in securing liberty:

Liberty was to be secured by Divided Sovereignty in our compound republic.

"The powers delegated by the proposed Constitution to the federal government are few and defined. Those which are to remain in the State governments are numerous and indefinite. The former will be exercised principally on external objects, as war, peace, negotiation, and foreign commerce; with which last the power of taxation will, for the most part, be connected. The powers reserved to the several States will extend to all the objects which, in the ordinary course of affairs, concern the lives, liberties, and properties of the people, and the internal order, improvement, and prosperity of the State." 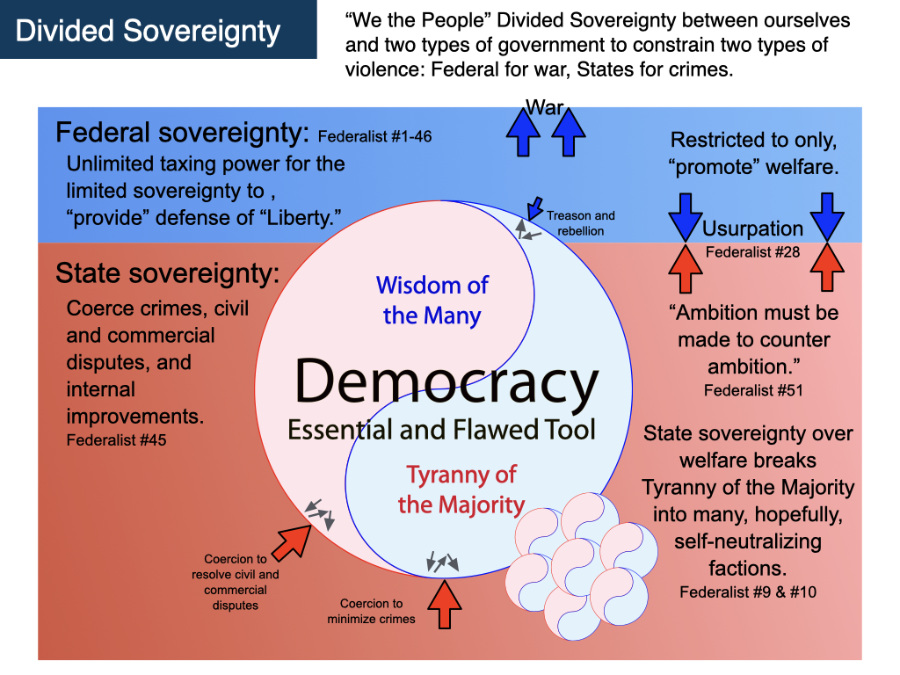 Democracy is an essential and flawed tool with two aspects:

“the majority, having such coexistent passion or interest, must be rendered, by their number and local situation, unable to concert and carry into effect schemes of oppression. If the impulse and the opportunity be suffered to coincide, we well know that neither moral nor religious motives can be relied on as an adequate control. They are not found to be such on the injustice and violence of individuals, and lose their efficacy in proportion to the number combined together, that is, in proportion as their efficacy becomes needful.”

In America, "needful" majority, Tyranny of the Majority accounts for:

The importance of Divided Sovereignty can be seen in breaking previous Tyrannies of the Majority:

All are examples of the majority voting to force a minority to comply with their wishes. The unintended consequence are:

The focus on this paper is the unintended consequences of the 17th Amendment adopted in 1913. By 1916 Congress began systematically violating the Constitution ("post Roads") to monopolize transportation energy, and communications. The cost of political corruption was reduced from buying half a state legislature to merely contributing to a Senate campaign. Senators abandoned their duty to their states to vote to tax to build infrastructure to support the sale of products from special interests, unions, and corporations.

Prior to 1913 there are 21 Presidential veto messages that enforce the Constitution's Divided Sovereignty with states responsible for "internal improvements" (infrastructure).

Since 1916, Federal policies caused 46% of 470 ton-mpg railroads to be replaced by 25 mpg roads. The cost of political corruption was reduced. Federal policies force Americans to spent twice as much on transportation as people in other economies with similar standards of living. Federal policies mandate Climate Change, oil-wars, Peak Oil, and debt.

"so there are particular moments in public affairs when the people, stimulated by some irregular passion, or some illicit advantage, or misled by the artful misrepresentations of interested men, may call for measures which they themselves will afterwards be the most ready to lament and condemn."

Following is a 30 minute presentation on: